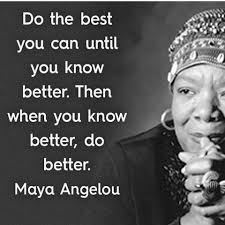 I had married the wrong man.  My parents had told me in no uncertain terms that I was making a mistake, that I would not be happy.  I would not listen, and I insisted that love would conquer all.  Fast forward 13 years to a woman in misery.  I was in a cage of my own construction, a bird battering myself against the bars of my cage not wanting to admit that I had created the cage.

It wasn’t until I could say, I was wrong, I made a mistake, that I was able to make the necessary change within myself.  It was only after I admitted that what I was doing wasn’t working any more that I could see the answers around me. When I took the first step in my change, I felt an immediate relief.  That doesn’t mean there weren’t more struggles, but I was out of the cage and learning to fly.

As I flew, I experienced many joys, but also many setbacks.  After much self reflection and lots of therapy I came to realize that the setbacks came from the guilt I carried about having been wrong.  If only I’d listened to my parents.  If only I hadn’t made that mistake.  I was free to fly but refused to enjoy it because I was angry at myself for having made a mistake.

I have come to realize that we are all here to grow, and growing comes from trying. Sometimes the things we try are glorious, other times we hit the wall.  I keep thinking of Thomas Edison’s response to failure.  “I haven’t failed.  I have just found 10,000 ways that won’t work.” We need to allow ourselves to learn, grow and change WITHOUT feeling guilty.  I think this quote pretty much sums it up.

“Do the best you can until you know better,

then when you know better, do better.”

In this time of change we are all feeling discomfort and pain.  Some of us are looking outside of ourselves for the cause of this pain.  Few of us are willing to look within.  When you’ve had enough of the pain and are ready to fly you might want to follow these steps.

Because I always have a choice, I choose love.